We are checking availability.
Thank you for your patience...

(from) US$ 501.42
Reserve
Temporary closure - Contact our concierge service for more information.
Gallery

Add to my favourites
11 Rooms
“All the charm of the magnificent Scottish Highlands”
Maitre de Maison - Robert McKay
With its stunning west coast scenery, Airds Hotel is the perfect place to soak up the breathtaking beauty of the Scottish Highlands.This exquisite boutique hotel, with charmingly decorated rooms, represents the very best of Scottish elegance. The hotel is located in the stunning village of Port Appin, near Oban, and offers excellent service combined with the finest cuisine and an impressive wine list. Add to this the incredible views of the loch and mountains beyond, and you can be sure that every meal will be memorable. Why not relax in front of a log fire or take afternoon tea in the garden to enjoy the view? There is so much to see and do in the area, including spectacular Glencoe, a day trip to the isles of Mull and Iona and a quick crossing on the passenger ferry to Lismore, perhaps with bicycles.
Relais & Châteaux Traveler Rating
Based on 355 Relais & Châteaux certified reviews.
Read reviews
Anita S.
"relaxing"
The property is beautifully decorated and comfortable and the open fires are very welcoming. The staff are attentive and friendly ... Read
TRIPADVISOR traveler rating: 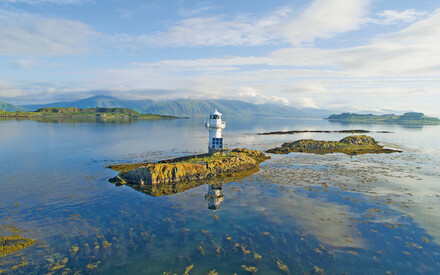 Based on 676 reviews
Read reviews
Our services
See all services

Airds Hotel’s restaurant is much more than a beautiful setting: in 2017 its restaurant was recognised by the UK's Sustainable Restaurant Association for its cuisine, resulting in it being awarded the highest, 3-star Sustainability status, which Airds has maintained throughout the years.

Aird's restaurant has a comprehensive and consistent approach to sustainable cuisine. Head chef varies his menus according to the seasons and availability of local produce, which is key to him. He tries to source ingredients within an 80-mile radius where possible. The hotel is lucky to be situated on the west coast of Scotland where game and local shellfish is in abundance and caught sustainably. On property, the kitchen garden supplies as much vegetables, fruits, and herbs as possible, and the restaurant makes its own breakfast marmalades and jams and pickles. Coffee grounds and food waste are, when possible, composted in the garden, which is great for the hotel's gardener. The restaurant's suppliers work to strict ethical and ecological standards, and it is important to the chef that most are recognised by organisations that certify sustainable agriculture or livestock farming.

WOULD YOU LIKE EXCLUSIVE BENEFITS AT RELAIS & CHÂTEAUX?
Register

The property is beautifully decorated and comfortable and the open fires are very welcoming. The staff are attentive and friendly but not intrusive. We stayed in a small standard room with a beautiful Lochside view and found it perfectly adequate for our needs as we wer ... more less