At the base of Mount Tanigawa, northwest of Tokyo, a traditional inn invites you into a world of contemplation. Wrapped in its welcoming simplicity, travelers experience the changing of the seasons more intensely.

A 24-hour stay is undoubtedly too short to learn to truly rest in keeping with the age-old rules of a ryokan. And at Bettei Senjuan, unplugging from the world is not a spontaneous exercise: After slipping off your shoes (everyone, Japanese or not), you should slip into the full attire of the ideal traveler, able to appreciate the main attraction of these traditional inns: the change of seasons. 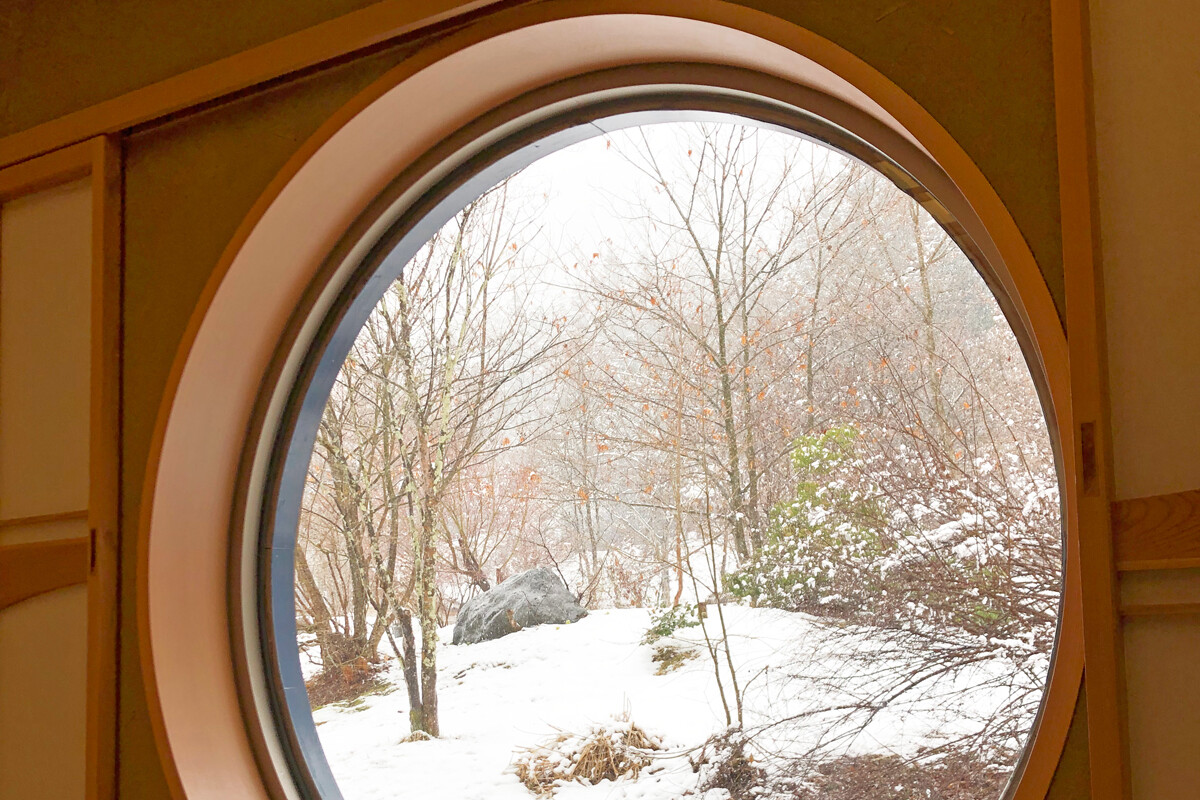 The childhood joy of dress-up never quite leaves us once we turn into adults, especially in Japan. For school, children wear the uniform of disciplined students, all bearing the same bookbag on their backs, a load that has not lightened much since the 19th century. On construction sites, workers slip into bright, conspicuous clothes that serve as mobile warning signs. Come rush hour, on the subway, the gray suit, white shirt, and black satchel are still the dominant combination, with a smartphone case sufficing to express each person’s individuality. You might even conclude that an appropriate outfit is the only thing that will let you fully don a social role, even that of the sophisticated contemplator. 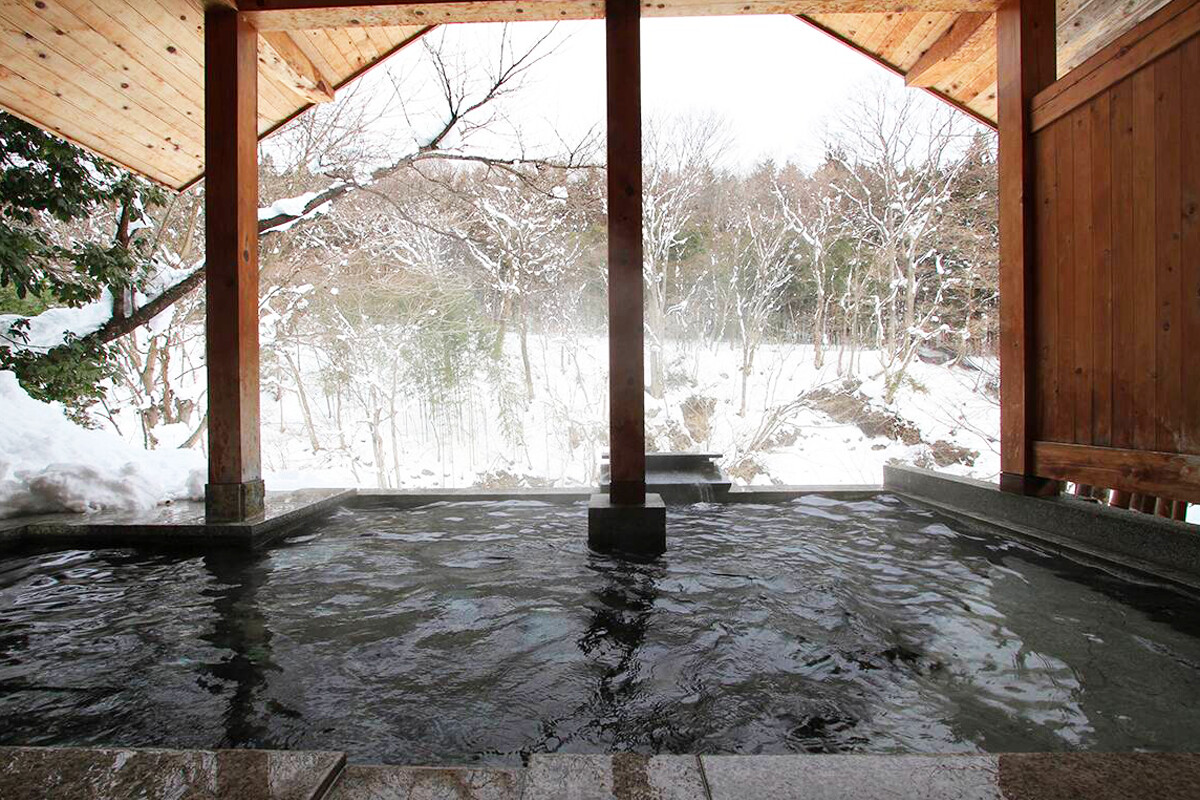 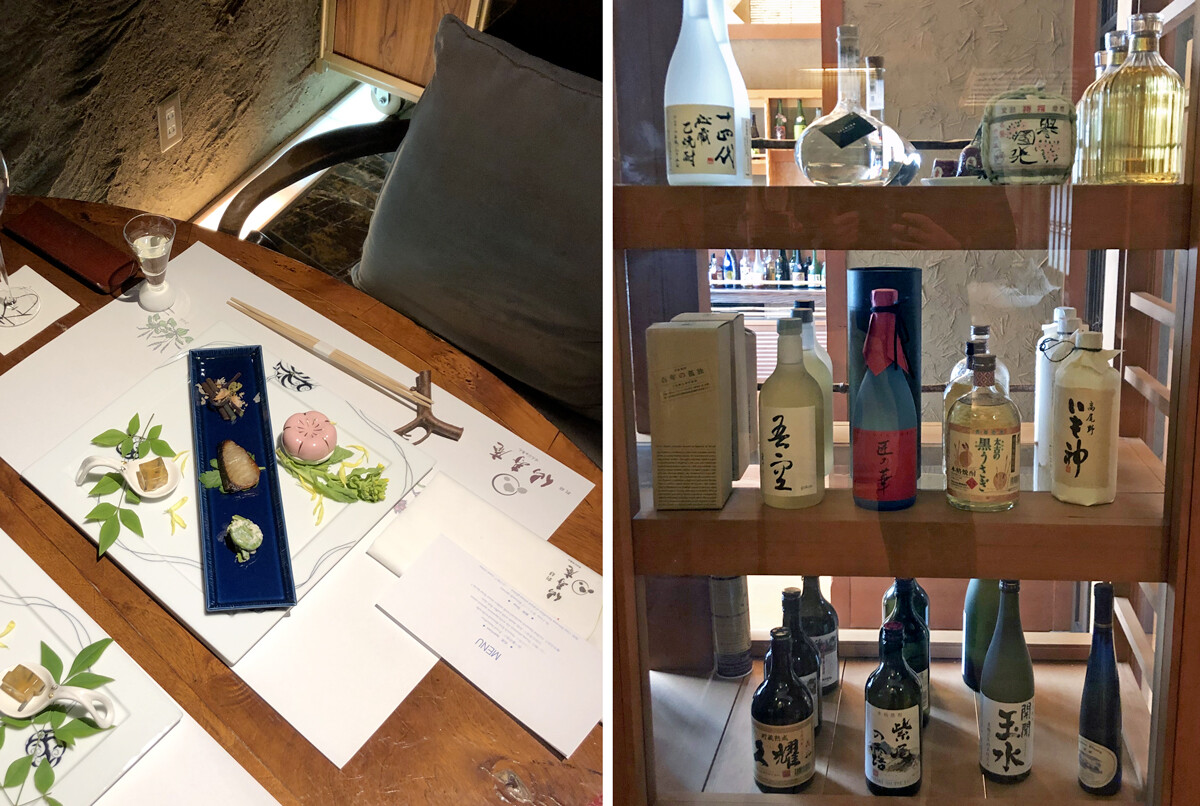 Having passed through first symbolic door on this journey, a soft-spoken female staff member offers us a mochi rice cake and some green tea, then invites men and women to put on the slippers provided and wrap themselves in a yukata to better cultivate the experience of nature. Amazingly, the weather on the day of our arrival was particularly suited to the experience: Two hours after leaving Tokyo under the sun and having fallen asleep on the local train, waking up at the foot of Mount Tanigawa felt distinctively dream-like: a painting in which a mountain, covered with trees in bloom, was suddenly blanketed with snow. White on white! To appreciate this tone-on-tone, we had to learn how to move slowly, reflect, embrace the feeling of a cold nose, and promise ourselves to long remember a vision that the latest smartphone could never capture. Winter refused to yield to spring. The silence outside echoed the silence on the inside.

The afternoon unfurled from tea to tea, taken from exquisite boxes, poured into museum-quality imperial china. Alas, to comply with the canons of omotenashi – Japanese hospitality –, there were only a few hours left to prepare our spirit for the meal ceremony. To better immerse ourselves in the environment, it was recommended that we take the waters. The Bettei Senjuan, built twenty years ago in accordance with ancient principles on the precise spot where Buddhist tradition says a princess turned into a hot spring, provides a private outdoor bath in each room, but it was in the group bath that the first effects of our contemplative initiation were felt: Back in our suite, reached via the corridor – windowed on one side and decorated on the other by craftspersons inspired by ancient rock-fresco techniques –, we were already not quite the same. 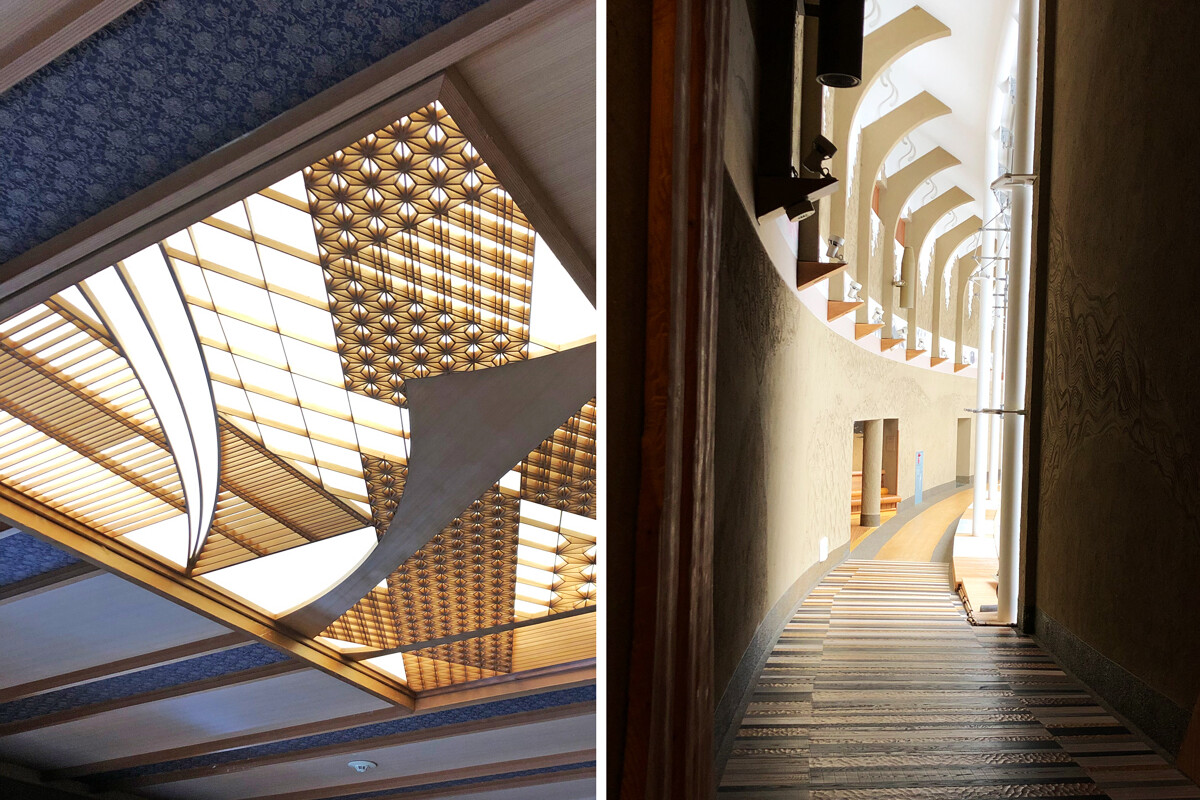 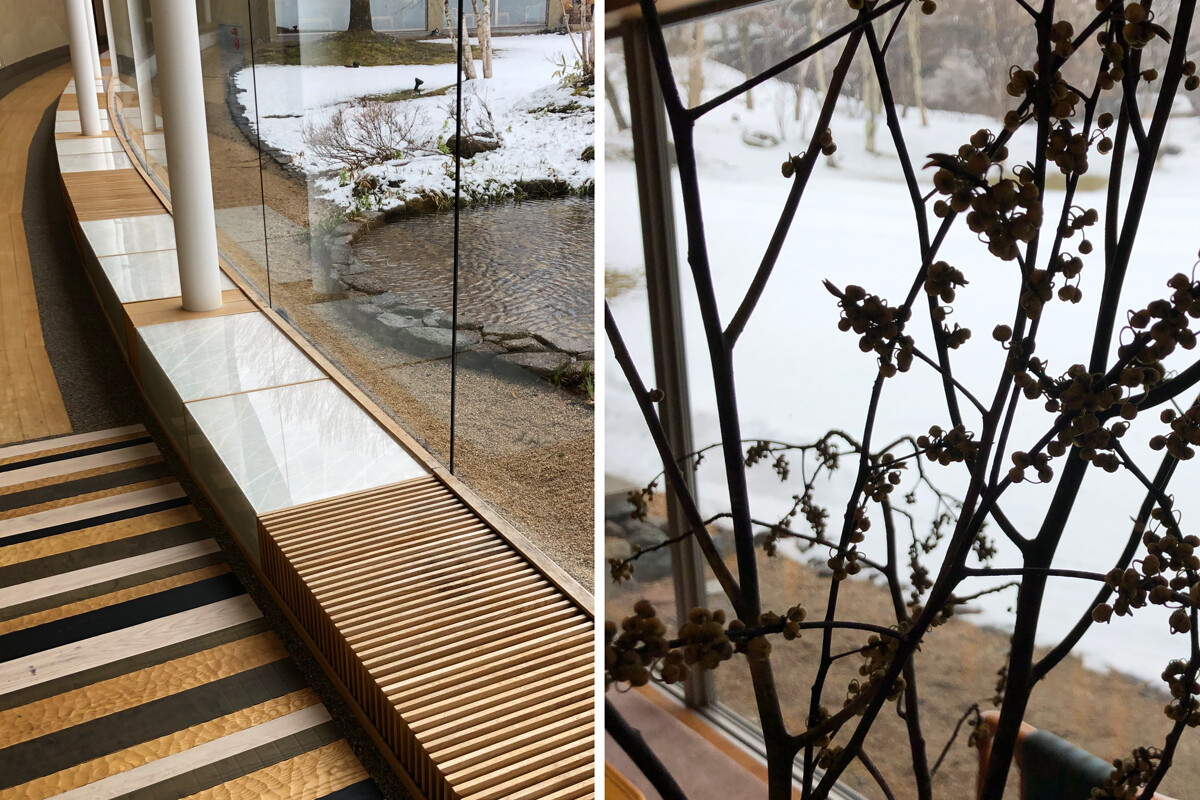 With freer minds, it became possible to grasp the chef’s intentions, although we were not familiar with either ostrich fern or butterburs. Clearly the succession of raw, grilled, marinated, simmered, and steamed dishes was nothing more than an edible reinterpretation of the landscape we had surveyed, then admired from the bottom of our emollient bath. It was evident to our newly opened eyes that this exact meal could not have been enjoyed in any other place or on any other day of the year! Suddenly, no doubt warmed and enlightened by the sparkling sake, we paid attention to the specific aesthetic tessitura of the ceramics, glass, and glazes. Without any mental preparation, would we have heard and understood the music of the friction of the silk sleeves of the learned and multilingual server?

Returning to our accommodations through the same corridor, now in the glow of nighttime, other details of marquetry caught our eye. In the half-light, the room seemed even more immense than it had at our arrival, luxuriously stripped of all furniture, save two unbleached mattresses unfolded on the beige tatami mats. And the silence inside echoing the silence outside.  But more intensely. 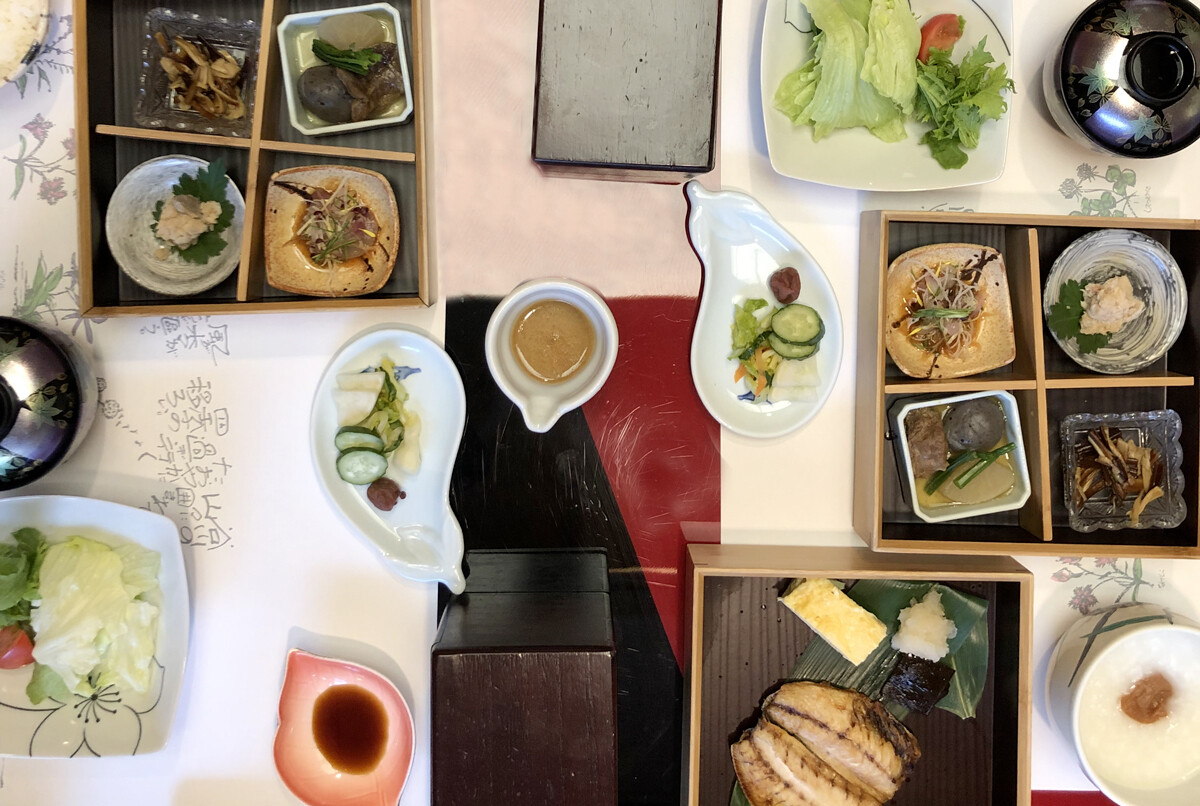 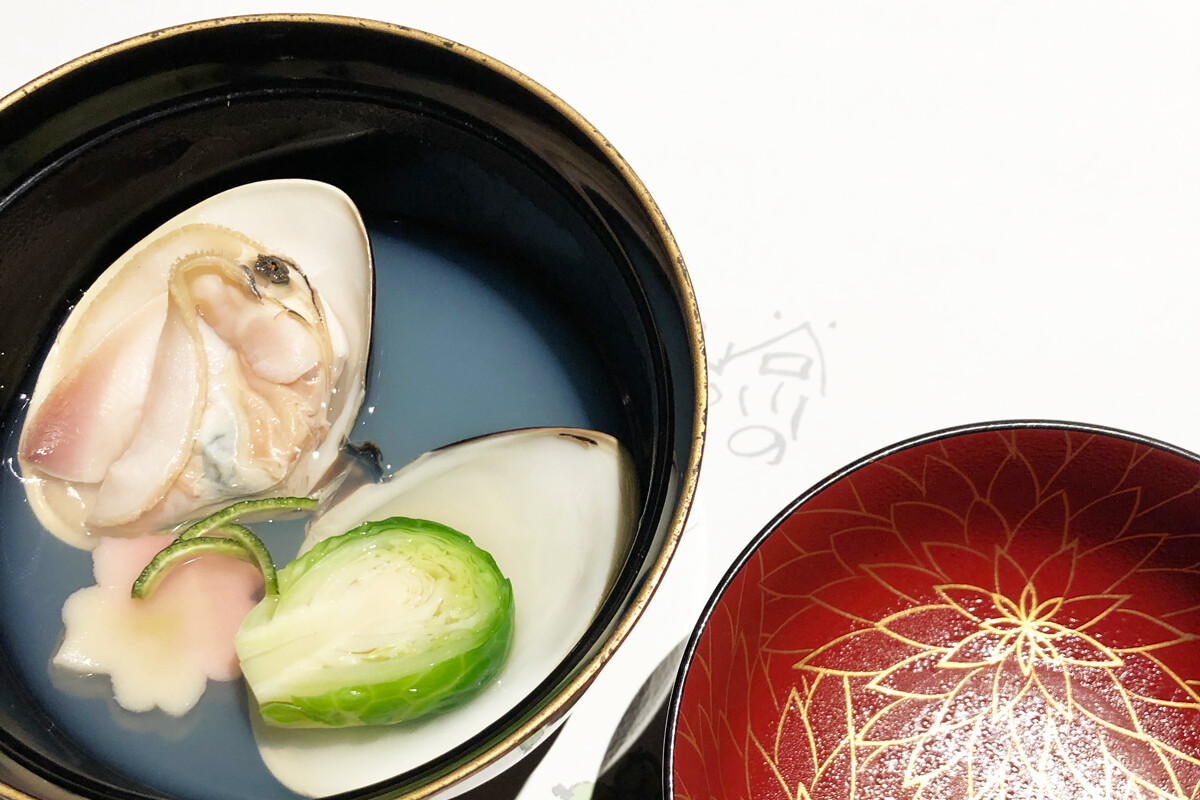 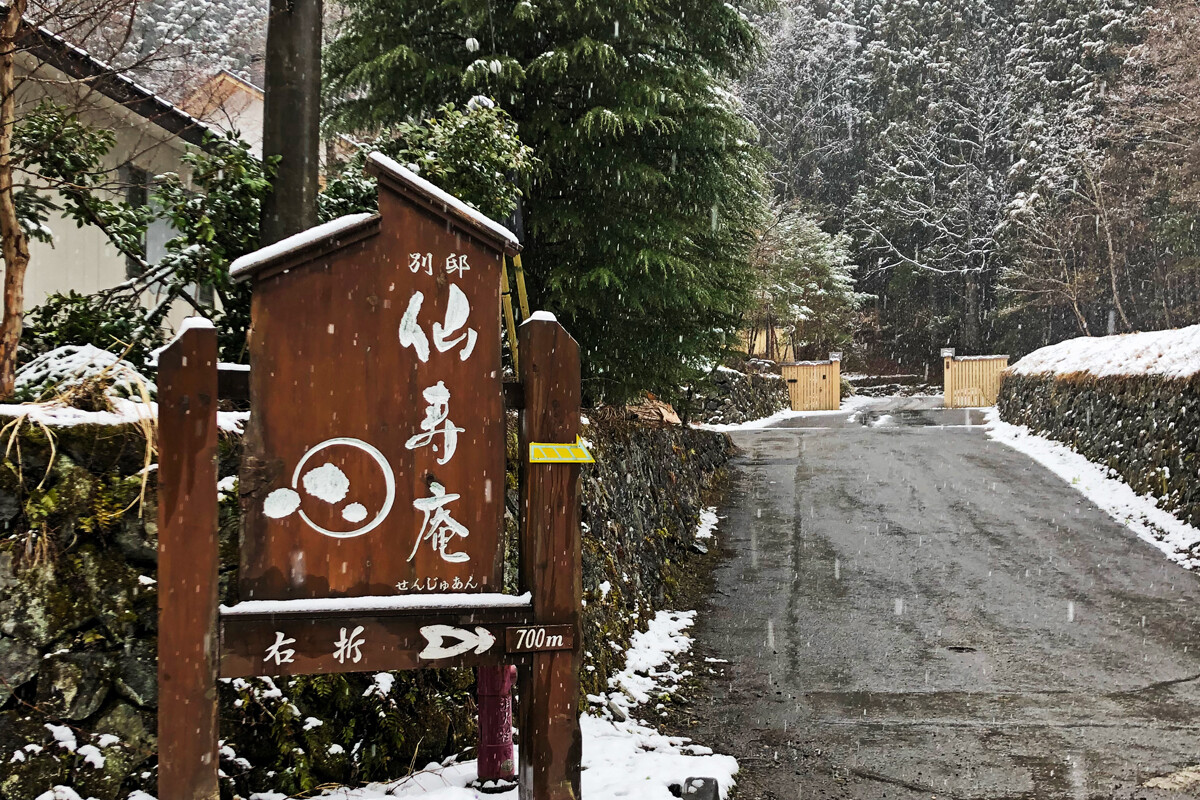