From the tip of Corsica to the north of Sardinia, journalist Alice Cavanagh and photographer Benjamin Loyseau follow the road journeying south which reveals a flair for fine produce, a long line of family tradition and the endless temptation of brilliant blue waters ever present on the horizon.

Sydney-born, Paris-based writer Alice Cavanagh has contributed to The Wall Street Journal Magazine, The New York Times Magazine and the Wallpaper City Guide to Paris. Her approach to travel is both escapist and inquisitive, founded on a passion for discovering new cultures and ways of life. Follow her on Instagram: @alicemcavanagh

Freelance photojournalist Benjamin Loyseau has been published in leading publications such as Vanity Fair, Libération and Le Monde. His work is informed by a passion for beauty and humanism: each image is a dialogue between people and photography, a reminder of the opportunities which come his way. Follow him on Instagram: @benloyseau

Our plane descends through the clouds and land comes into sight - majestic mountain ranges, punctuated by granite outcrops in vivid colors. The view stretches all the way to Cap Corse, a coastline flanked by dramatic cliffs and a horizon heavy with salt.

Our first port of call is La Villa Calvi, set up high with a view of the town below. Even on overcast days, mountains loom behind the cloud cover like a shadow. When the skies are clear, the peaks change from a bluish grey to pinks and reds at sunset, glowing in the fading light. 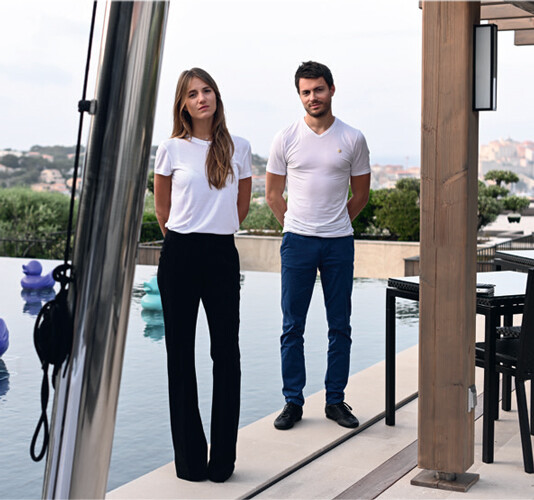 Marie and Antoine Pinelli work with their parents at this family-run hotel. “We’ve spent our whole lives here. When we were born, there were only plants here and now we’ve seen so many additions — the pool, the helicopter landing and so on”, the siblings say of  La Villa Calvi, which their father started in 1992. “We were always going to work here; it’s family, and that is Corsica.”

We’ve arrived at the start of summer, and the staff have time to chat with the guests who’ve arrived ahead of the masses. That evening, we sit by the pool and sample Le Rosé de Pauline, a local rosé so pale it’s more gold than pink.

Calvi’s fortressed walls tempt us to explore the town. The citadel dates back to the 14th century and is rumored to be the birthplace of Christopher Columbus. Visitors tour the ramparts, pausing to take in the vast blue ocean. With the arrival of summer comes an itch to see the sea - to dive in and be swallowed up.

We drive to La Signoria & Spa, a charming house where once a noble family cultivated grapes in the vineyards. Owner Jean-Baptiste Ceccaldi has always taken care to respect its history. “When we add something, we create it using old materials, as though it had always existed.”

Set in an oasis of palm trees and verdant gardens, it’s easy to imagine that guests come here to forget about the world. Of course, they come to eat as well. Chef Alexandre Fabris works with local producers to find the freshest produce from both land and sea. 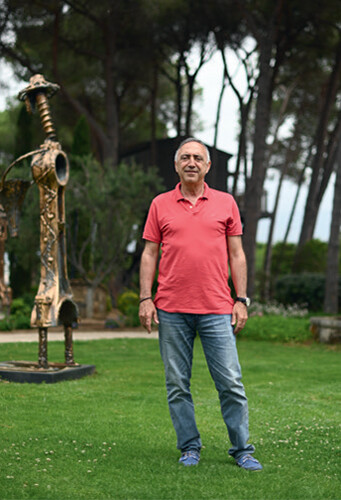 “My parents were pioneers of the hotel industry here. We are five siblings, four boys and one girl, and when we finished our studies, they started to buy properties so that each child would have their own small hotel”, says Jean-Baptiste of his hospitality roots. “We all worked together, it was a family project.”

Reluctantly, we say goodbye, heading south to Porto-Vecchio through forests of eucalyptus trees, pine trees and the maquis - the evergreen underbrush that gives Corsica its intoxicating scent. We pass through sweeping valleys, fields of olive trees and haystacks that catch the late afternoon light as it breaks through the clouds.

Our destination is the Grand Hôtel de Cala Rossa, set off the beaten track on a peninsula shut off from the rest of the world. It has been here since the 1960s, but its legendary status began when Toussaint Canarelli took on the property in the 1970s. 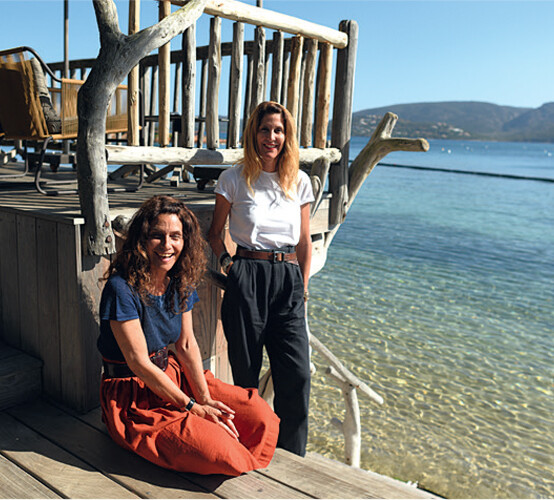 In 2017, Toussaint Canarelli passed the hotel down to his children, Paul, Lise and Hélène Canarelli; and the three have since struck a balance between maintaining the modernity of the hotel without erasing its history. “Over time, we’ve understood that even if there are corners that have been patchworked together, it’s part of the charm of the hotel and why the guests love it here”, says Lise. “If we kept modifying everything, we would lose that. It tells the story of the hotel.”

It’s more like a family home than a hotel, with places to curl up, read a book or enjoy a cocktail. Many of the staff members have been here for over 20 years. That feeling of tight-knit loyalty is promoted by the founder’s children, Paul, Lise and Hélène, who now run the property. Family tradition is ingrained in Corsican culture — it’s why we feel at home wherever we go.

The next day, we’re sunbathing on the jetty when the catch of the day arrives. The hotel’s chef, Pascal Cayeux, surveys the offer. There are crabs, lobsters and local fish like corb, as well as smaller fish that Cayeux will make into a soup - each day he responds to what nature provides.

That night, we dine at La Table and sample figs plucked from the potager a few hundred meters away. The vegetable garden is the work of Philippe Niez, who has cultivated an array of herbs, eggplants, tomatoes and summer fruits like strawberries.

The bay tempts us in shades of turquoise, cerulean and azure. Approaching Palombaggia beach by boat, it seems we could be in French Polynesia — the most sublime blues offset by the whitest of sands.

We wade through the water to the sound of kids laughing in the shallows and the hum of the midday sun. Then, we head for lunch at Les Bergeries de Palombaggia, where chef Jean-Jacques Gauthier turns out seafood dishes with ease.

The next morning, we’re up early to take the ferry to Sardinia, and barely have time to glance at the clifftop town of Bonifacio except from the deck as we steam towards Italy.

"The bay tempts us in shades of turquoise, cerulean and azure."

We arrive at San Pantaleo, a charming village of craft shops and chic boutiques. There is a singing festival on, and the locals are in full regalia. This is five minutes from Petra Segreta Resort & Spa, a sprawling retreat with a view of the Costa Smeralda all the way to the Maddalena archipelago.

The hotel is run by husband-and-wife team Luigi and Rosella, who escaped here from Rome almost 20 years ago. Luigi grows organic vegetables and raises goats, pigs, chickens and geese. They make their own goat cheese ricotta, which forms the filler in a delicious ravioli.

The breakfast table groans with pastries, jams, fruit and cheese; we take our fill before meandering back to the ferry. It’s a cloudy day: the sea, which sparkled in the sunlight, has now taken on a grey veil. We don’t have time for a swim, but there is a sense of something unfulfilled.

By the time we get back to Bonifacio, the sun is out again, and we decided to seek out one last swim. We’ve been told about two mythical beaches: Sperone and “Petit Sperone”. Sperone is just a 15-minute drive from town. It’s quiet at the first beach, a narrow sliver of sand.

We walk on to Petit Sperone, and the color of the water takes my breath away. That blue is what keeps me going from October to June each year, until summer comes again.