Sometimes the joy of a beautiful evening is simply the culmination of a subtle harmony of elements: a cuisine, a decor, a landscape or even a vineyard. It is when everything comes together through this delicate turn of magic that rare moments are created.

A journalist and author who is fascinated by the art of living. He has written some 40 books, is a contributor to Air France Magazine, M le Monde, Purple Magazine, Casa Brutus (Japan), and Holiday and runs his own website : simonsays.fr

Napa Valley is one of those world-famous landscapes that inspire the imagination. Here, fantasies of the promised land mingle with our cinematic memories to create a kind of Eden, where winemakers continue to prove that it is indeed possible to produce some of the best wines in the world. Surrounded by majestic nature, a fascinating road wends its way through the valley. It will come as no surprise to discover houses, resorts and restaurants along the way, each o ering enjoyment and well-being for which the bar is set remarkably high. Exploring Napa Valley is one of our pretty planet’s most captivating adventures.

The resonance of Quince, this renowned restaurant awarded three Michelin stars in 2017, comes through its contrasts. While outside San Francisco blows and foams, this immense dining room prepares itself in a state of reverence. Testament to this preparation are the dishes presented as if they were symphonic scores or some kind of minimalist land art, like with the potatoes scattered over a large white ceramic tray. Thanks to the skilfully spaced tables, it’s easy to fall into a state of meditation that hums with the rhythm of the dishes: panna cotta with dabs of caviar, lobster with a lemon verbena sauce, and so on. Each dish proceeds in the same allusive pattern by hitting notes of a rare precision (Monterey Bay abalone with black garlic). In Michael Tusk’s kitchen, the spirit of the moment oscillates between expression and profound meaning. 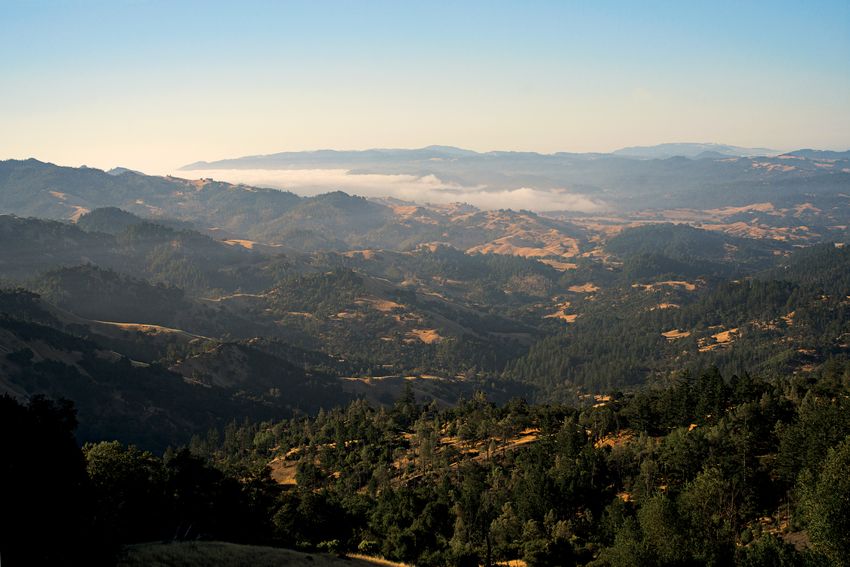 With San Francisco lying just in the background, enveloped by its fresh sea mist, when the panorama shifts. Appearing out of this natural progression is one of the region’s nest destinations, Auberge du Soleil. Spread across a vast territory, the houses scattered amid the trees are part of this luxury resort. While its long swimming pool and remarkable fitness centre are enticing, it’s the sight of a clientele in total relaxation. What’s Auberge du Soleil’s secret? It can be found in the sumptuous guest rooms, whose huge bathrooms have large Italian showers. Then there’s the Michelin-starred restaurant, whose cuisine offers the natural wonders of this area. The simple, tidy dishes stay true to the generous yet hemmed expression of this lavish landscape, as in the burrata with tomatoes, apricots and almonds. Here, guests linger with ease, eating and sipping under the glow of the evening’s light. 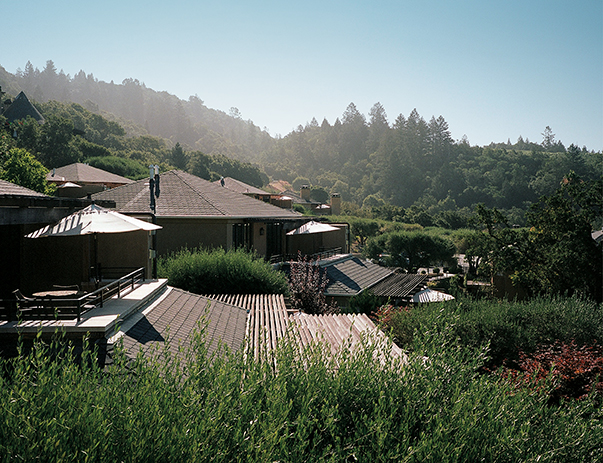 After the unremarkable town of Oakville, on more than 300 hectares, of which only 10 per cent are planted with grapevines, Harlan Estate casts its spell. Overlooking the valley, on the terrace of a simple, elegant farmhouse — somewhere between a hacienda and a villa — a calm gentleman sits with hawk-eyed attention. His name is H William Harlan, but after an energetic handshake he asks to be called Bill. This 76-year-old man is a legend. He built an estate and a fortune through back-breaking hard work. Today, his wines culminate in the market’s highest rankings and prices.

This gratified visionary, who is now betting on the next generation (the thirty-somethings that surround him, including his 30-year-old son Will and 27-year-old daughter Amanda), claims to be above all a simple farmer. He looks out onto his new estate Promontory, intended for the new arrivals coming to California, already (very) rich and having a sort of bemused attraction to wine. They are why the estate’s buildings have been constructed in styles that range from Japanese simplicity to the warmth of California haciendas. 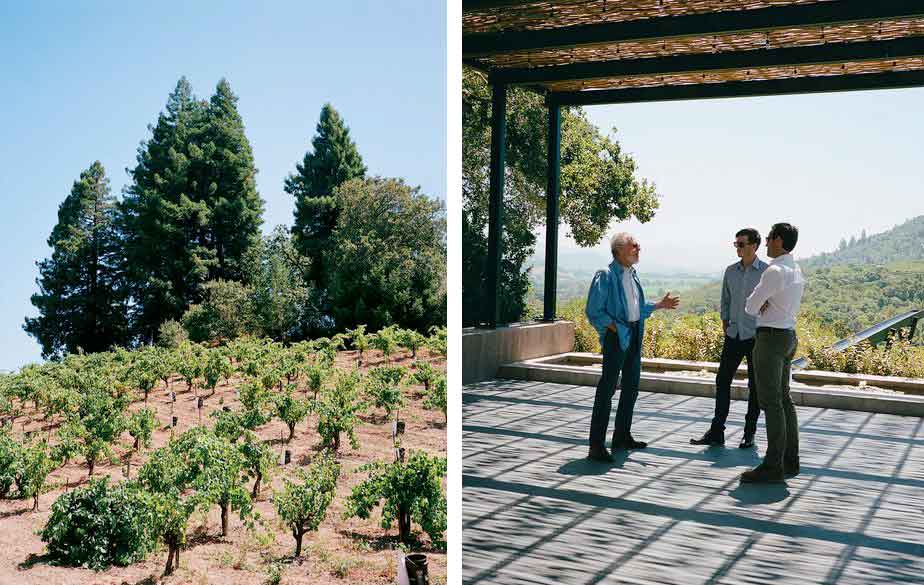 ”A wine is not only a bottle, a label, a vintage. It’s the philosophy of the winemaker, his way of adapting to the soil, expressing the soil and thinking about future generations and sharing his values.”

We come filled with expectations, seeking perfection. We wonder if a restaurant can merge into its landscape and the history of its wines. If since the beginning of the trip, we’ve steadily been approaching this idyll, it’s probably the experience at the Restaurant Meadowood where everything truly falls into place.

This restaurant, celebrated within the region and well beyond (three Michelin stars), sits within the spectacular grounds of the Meadowood Estate, whose owners are Stan Kroenke and... Bill Harlan. In terms of reception and comfort, Harlan’s same high standards can be found here. From the entrance to the spa (regularly awarded with trophies by tourism professionals) to the golf course, swimming pools, tennis courts... All of this unfolds across a vast estate, more than 100 hectares large — plenty of space to scatter about its deeply luxurious guest houses.

Chef Christopher Kostow seems as razor sharp as the instigator of the place, Bill Harlan. The chef carries himself with the same humble manner, doubled with authentic ambition and stripped of vanity. As such, the cuisine here is focused on the essential, aimed directly at the heart. The products are always sublime, whether they be oysters, potatoes, chicken confit in a small roll, smoked beef or a subtle foie gras slid into a thin slice of avocado. 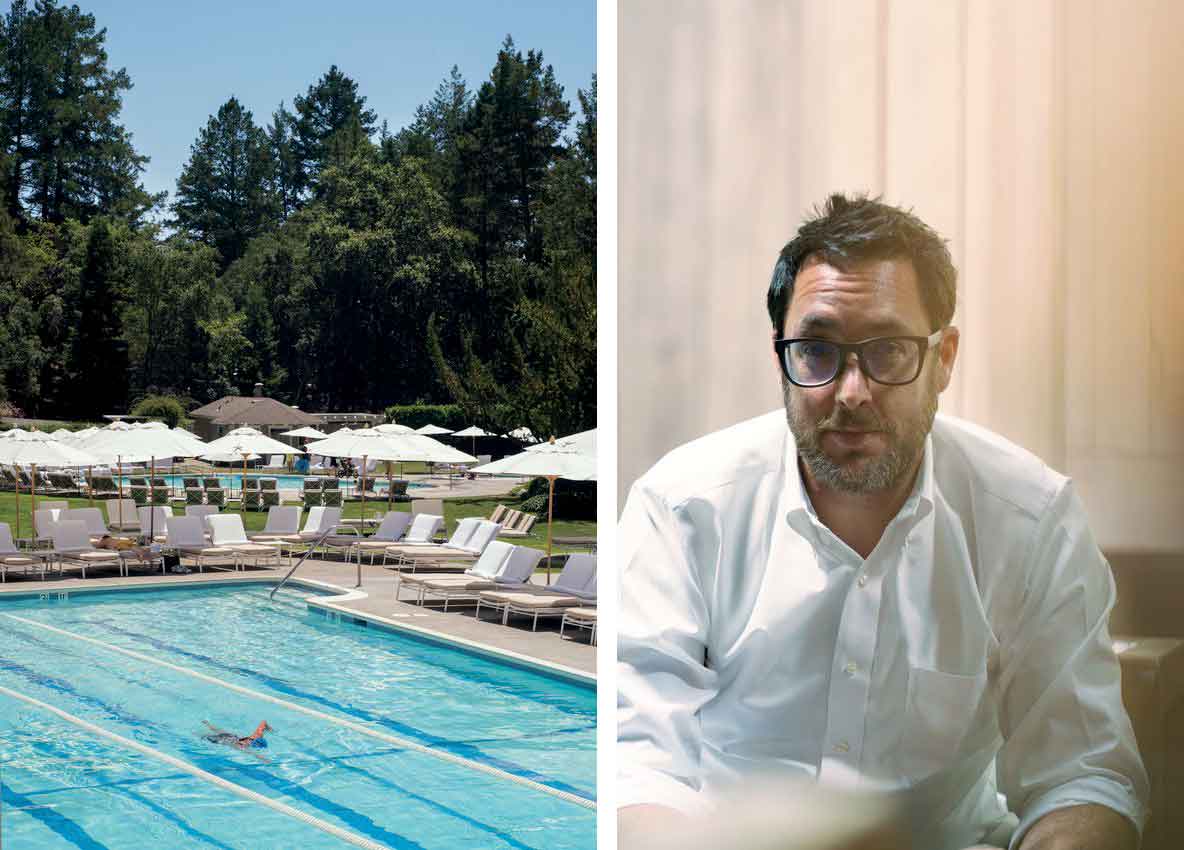 “The world today expects innovation: Facebook, Instagram, the decor... the culinary world has become more visual and in need of an image.”

Christopher Kostow - Three-Michelin-star chef of The Restaurant at Meadowood

FIFTH LESSON: RETURNING TO THE SOURCE

Appearing at the bend of a winding road is Healdsburg, one of the ten smallest towns in the United States. We pinch ourselves to make sure we’re not dreaming as we gaze upon this beautiful mansion with its breathtaking hints of marble, Louis XV chairs, and armoires adorned with wistful designs. Owned by Bill and Carol Foley, Les Mars is an enclave of otherworldliness astray amid plush cushions, damask fabrics and Italian linens. There are 18th and 19th-century antiques, ancient engravings, mattresses incredibly thick, as well as a few touches of modernity here and there. But above all, it is the careful attention of the staff, agilely working around the mansion’s sixteen rooms. 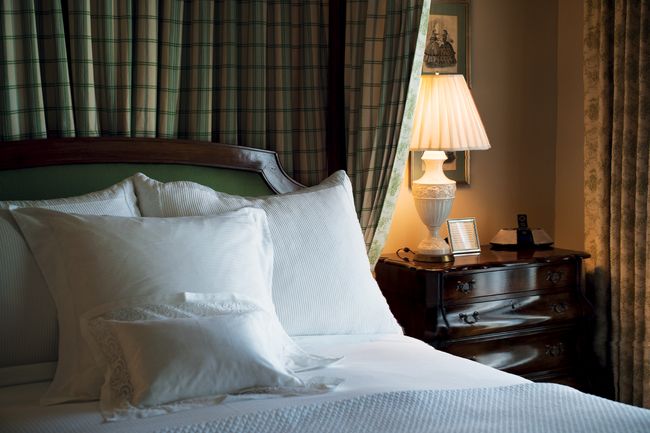 A few blocks away, we leave Napa Valley to Sonoma County. A new destination has recently opened that is sure to get people talking, SingleThread Farm, a project deeply rooted in its terroir. This model farm confirms a growing sentiment shared across the world: namely that being rooted in a place is proof of one’s attachment to the truth behind its products. Five contemporary rooms (including one large suite) take care of the reception, itself augmented by a youthful and smiling staff working together to fulfill this ambitious project. In the dining room, a table adorned with a spectacular composition of moss and small stones plays on the resonance of the place while a perfumed oyster, a pickled fish, sashimi, macerated vegetables, an egg (from the farm) with caviar and a rich shell fish mousse are promptly laid here and there. This place is like a chorale sung by a choir of craftsman from around the world, farmers and servers, along with a chef, who, drawn to this virtuous circle, responds in verse through a contemporary cuisine that plays on continents, textures and notes.

SEVENTH LESSON: THE COURT OF THE GREATS IS JUDGED IN THE LITTLE DETAILS

Thomas Keller’s renowned The French Laundry is full, but his other restaurant, Bouchon Bistro, is available the moment it opens for service. Voices are prepared, a crooked chair replaced, the dishes of the day confirmed and a last-minute straightening of a tie is done. The bistro’s menu is a hymn to French cuisine, featuring rillettes, devilled eggs, a Lyonnaise salad, roasted chicken and Burgundy-style snails. There’s even an onion soup that would have certainly caused a revolt by peasants in times past due to its joyful disposition. It comes with a little dome of melted Comté cheese and sweet caramelised onions that tenderly converse with the rustic bread soaked in beef broth. 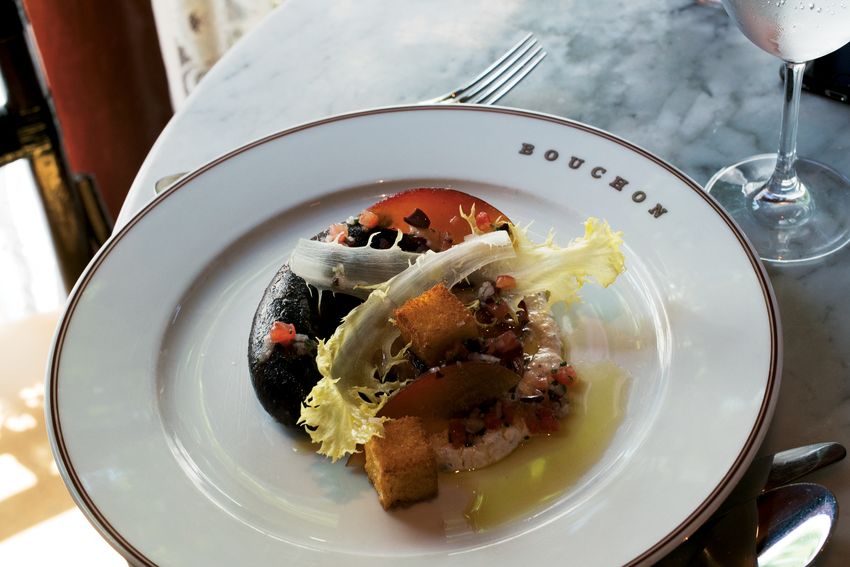 An hour by car later, punctuated by the majestic bridges of San Francisco, the reservation at chef-owner Josh Skenes’ restaurant Saison presents itself as a perfect counterpoint to our last stop. This warehouse, located not far from the San Francisco Museum of Modern Art, is home to a contemporary cuisine. The kitchen staff performs directly in front of thirty-some guests spread out close to the action. From here, it becomes easy to see how a restaurant is the sum of the attention it pays, the actions it renews daily, the cooking temperatures it refines. Despite its resounding success, the team at Saison remains forever on high alert. Saison’s impeccable culinary skills truly shine. They reveal the splendid nature within each ingredient — whether they be perfectly juicy prawns, sea urchins, meats, vegetables or others. 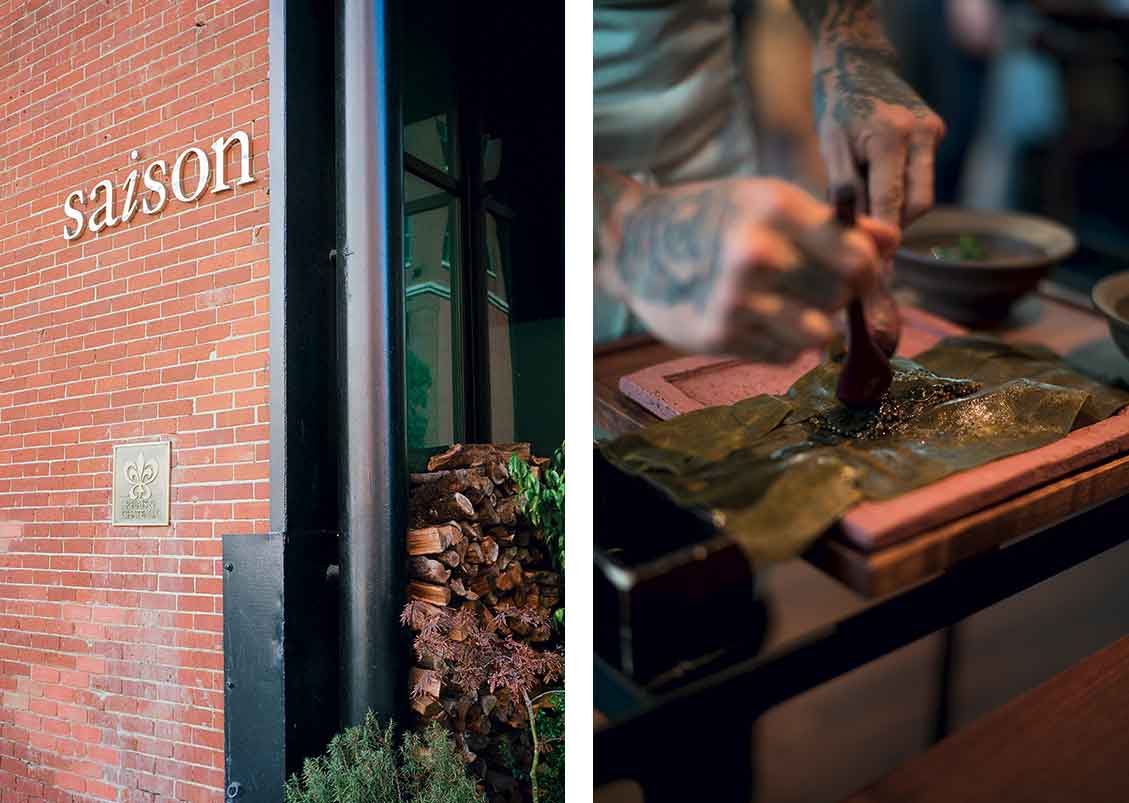 NINTH LESSON: IS THERE SUCH A THING AS CALIFORNIAN CUISINE?

We must now get back on the road and heading this time to the south, to Los Gatos, to arrive at the restaurant Manresa. It is here where David Kinch lives. Once again, we’ve come to meet a renowned culinary figure, a handsome character whose face is chiseled with an air of curiosity, mischief and passion.

In his kitchen, before the big dinner, eighteen people work in silence amid the vapors. With his sous-chef, he refines the appetizers, a series of amuse-bouche: finely sliced nectarine, smoked cashews, a broth of scented jam, an aromatic jelly. It’s like a small earthquake in a spoon!

So, what is Californian cuisine? “Here, in California, we are so happy to be able to live in an environment that is so rich, to have a beautiful gastronomic culture and a passionate clientele. What distinguishes us, and that for which we were the first in the world, is health, well-being, a sense of nature.” 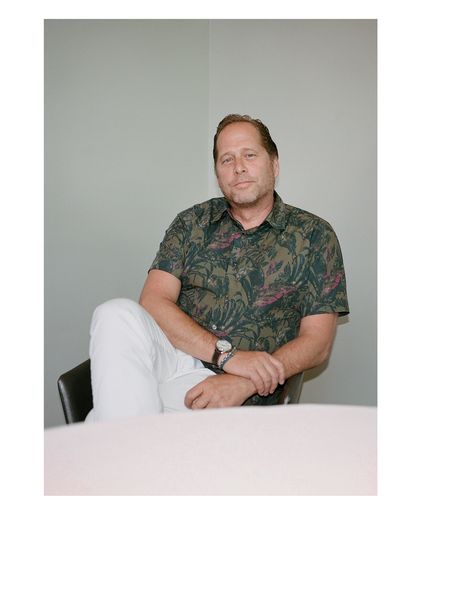 ”We have democratized the world of restaurants and wines, removed its inhibitions, made it fluid. Today, interest in this universe can be spontaneous, simple, without social or cultural barriers. Here, it’s all about feeling good at the table.”

Californian cuisine is driven not only by brilliant chefs — those who swap places in the rankings and hammer out “signature” dishes — but also by exciting establishments such as Gary Danko, an institution in San Francisco. You need only to stand at the entrance to be able to taste the brewing energy of the well-to-do tables. Here is where the America of the living, powerful and bon vivant sit down to battle it out with a refined cuisine. This is a place for all generations and origins, and where we have come to celebrate a birthday (numerous candles spread across the room) and enjoy life amid a formidable soundtrack — that of voices. The energy in the room is palpable. Gary Danko is a deliciously dated restaurant, with its lighting, champagne darkness, velours and lampshades all complicit in its design. We joyously feast on oysters accompanied by caviar, pearls of courgette and creamy sauce. The wine list is one of the state’s most brilliant. The evening flies like a shooting star (just like that of the Michelin Guide), the glee of the tables is infectious, and leaving over the bay, we can fill the fresh air of an exuberant, enlivened, and bold California. 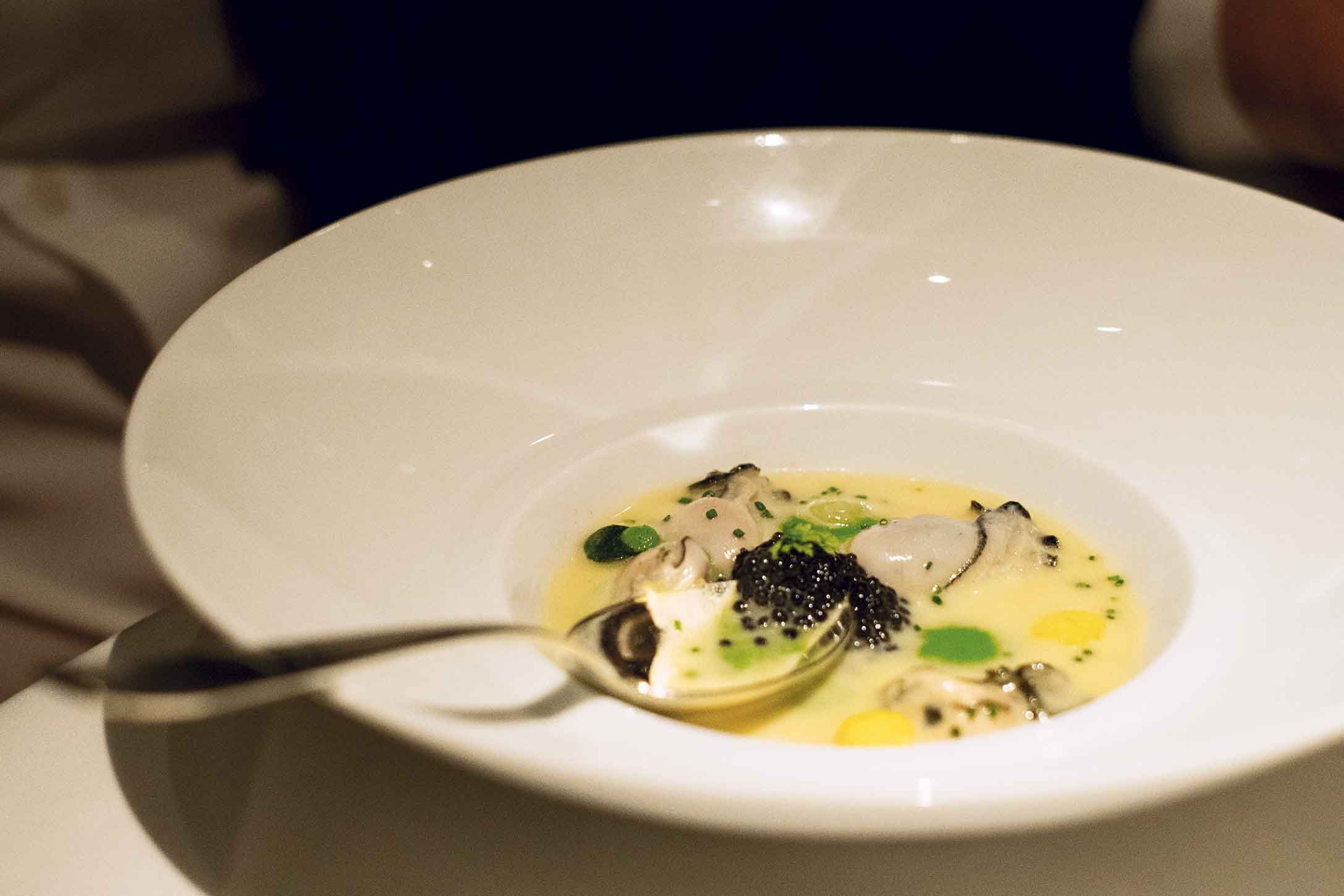 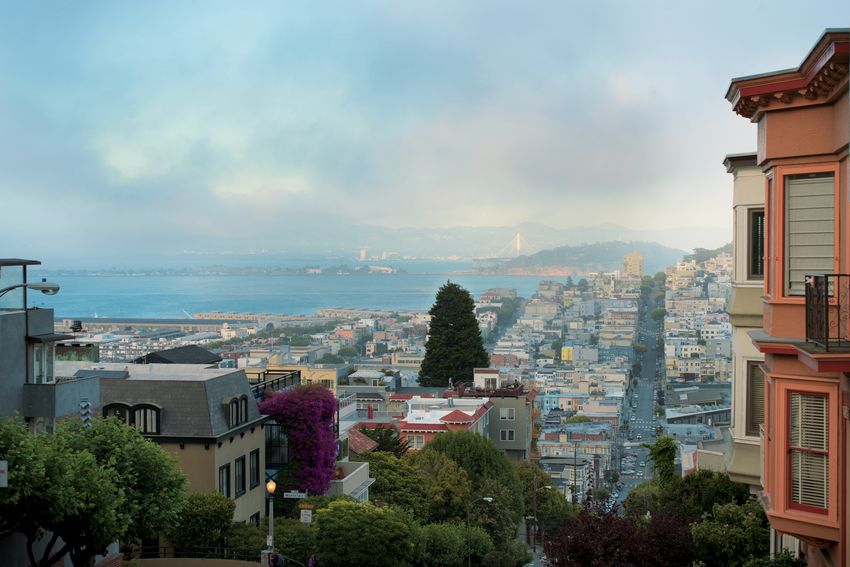