Everyone deserves a good proposal story – so here are ten of our favourite settings around the world that are eager to help you tell yours.

Where: Château de La Chèvre d'Or  on the slopes of the French Riviera lies in the medieval village of Eze, between Nice and Monaco, and looks out over the Mediterranean.

Romance points: Build the romance on a trip out to sea aboard the hotel’s glamourous Saint-Tropez boat, returning for a picnic on the beach; or on a leisurely drive along the coast – just the two of you… and a classic sports car - à la James Bond. Stop for a picnic lunch prepared by the Chef, before heading back to your private suite. Will the moment happen over a dinner of French and Mediterranean cuisine in one of Chèvre d’Or’s four restaurants or on a stroll through the cobblestone streets of this cliff-side village? 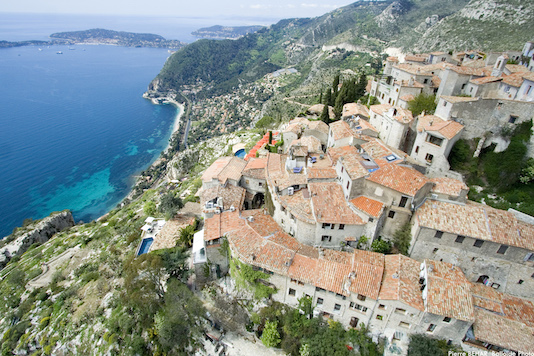 Where: Inverlochy Castle sits at the foot of Ben Nevis in Scotland, the highest peak in the United Kingdom. This 19th-century mansion near Fort William is set in the Outdoor Capital of the United Kingdom – Lochaber – and has one of the most striking Scottish panoramas and its own loch.

Romance points: Upon staying at Inverlochy Castle, Queen Victoria remarked, “I never saw a lovelier or more romantic spot.” The enigmatic waters of the lochs and the misty mountains of the Scottish Highlands peak through the windows of your private suite, but for the more adventurous couples, you can head out to explore the terrain up close – on mountain bikes, hill walks, fishing, skiing on the Nevis skiing range at your doorstep. Make the occasion all the more special by arriving by helicopter or Chauffeur Driven Car. Make your love yours during an intimate dinner in one of the three dining rooms or a pink afternoon tea, with a glass of wine. 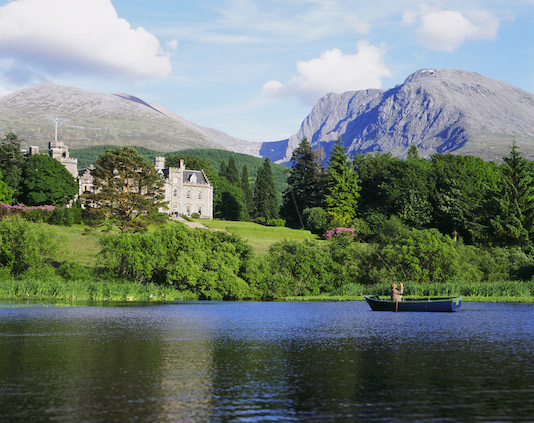 3. In the Heart of Africa

Where: Arrive by helicopter after a thrilling flight over the Victoria Falls to your own private piece of the Zambezi River at Royal Chundu in Zambia. Set upstream from this world wonder, Royal Chundu’s River and Island Lodges invite romance with 15 kilometres of private waterway.

Romance Points: Couples can bath under the stars in their own outdoor bubble bath at Island Lodge, soaking in the stillness of the river and the starriest night sky you have ever glimpsed. Dine in privacy on your suite’s deck or at a dreamy riverside beach setting, before slipping beneath the sheets of a romantically prepared bed. Chances to get down on one knee abound – from the private riverbank picnic on the Persian rug, during a couples massage overlooking the river, or on a sunset cruise with sundowners in hand.

4. The City of Casanova

Where: Londra Palace, a place that has welcomed artists and celebrities alike - Tchaikovsky, D'Annunzio, Borges... A Venetian palace away from the other lovebirds but close enough to the city to feel the romance in the air. Close to Piazza San Marco, it looks out over the San Marco Basin and Lagoon and city’s majestic rooftops and church towers.

Romance points: One word: Gondolas. Slip down the canals of Venice, past beautiful baroque and Renaissance buildings, with your loved one in your arms. Consider a picnic proposal atop the Londra Palace’s altana roof terrace, with a basket filled with delicious Venetian treats or pop the question while sitting out on the veranda on the Riva degli Schiavoni with Venetian dishes from chef Loris Indri. 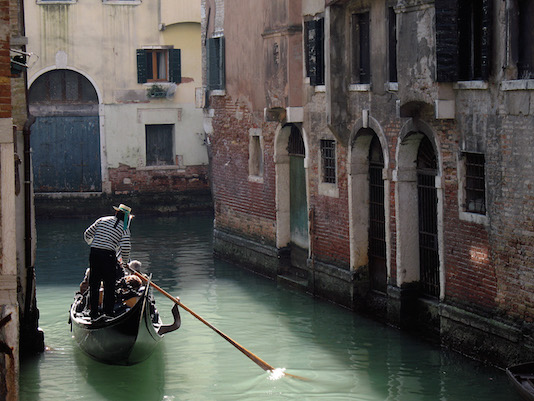 5. In the name of Aphrodite

Where: Set on the seafront in the quiet village of Fira in Greece, Sun Rocks is said to have one of the best magnificent views in Santorini.

Romance points: Imagine...the sunsets from the top of the Caldera's cliffs over the volcano of Santorini. An intimate outdoor seat at the Elea Restaurant  with ravishing views. Sculpted into the rocks by the pool, the dishes of the chef Arthur Arakelyan are inspiring. An ideal retreat for couples. Roam hand in hand through meandering alleys, to the promenade alongside Greece’s Aegean Sea. 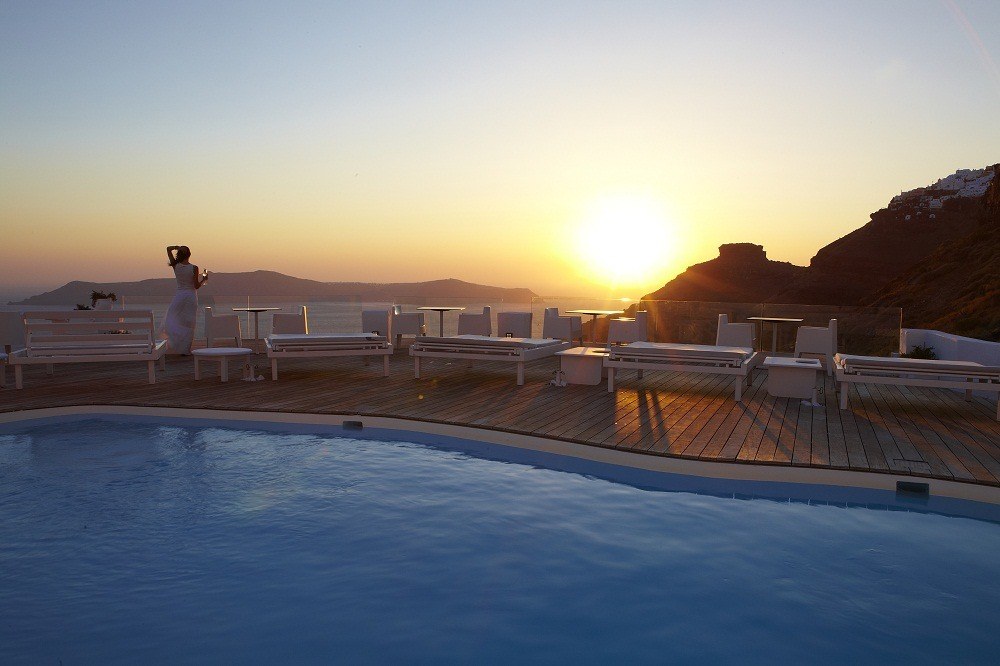 Where: Spain’s La Torre del Visco is set on an 89 hectare farm in a remote valley untouched by the modern world, bordered by the river Tastavins and the Ports de Beseit mountain range in Fuentespalda in Teruel – often called 'Spain's Tuscany', with its medieval villages and terraced vineyards.

Romance points: One of the 10 most romantic hotels in Spain, according to Condé Nast Traveller. The hotel team is experienced in going all out to help set the mood, whether the right moment is in a rose covered pergola in the fragrant gardens of roses and olive trees, by a log fire in the sitting rooms or under the historic charm of the tower that dates back to around 1449.

7. Down on one knee, Down Under

Where: Founded in the 1920s, on the banks of the Waikato River in New Zealand, Huka Lodge finds itself in a landscape of snow-capped volcanic mountain peaks, wild tussock, lush wilderness and clear blue lakes and streams, upstream from the Huka Falls.

Romance points: You’ll have a piece of the New Zealand countryside all to yourselves in one of Huka Lodge’s exclusive cottages - with butler service and a private chef, your own infinity pool and spa pool, and an outdoor fireplace for cold nights. Great proposal potential lies in the range of private candlelit dining experiences – whether secluded, amongst the natural beauty of the gardens, on the banks of the Waikato River, in the wine cellar, or on the outdoor terrace. 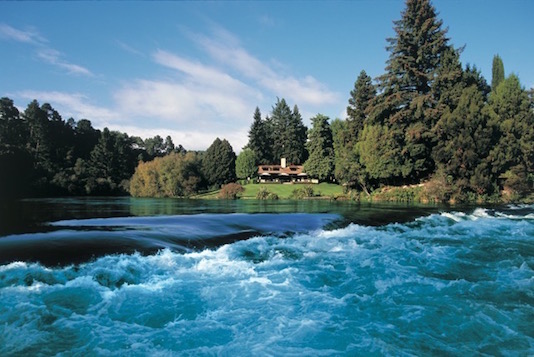 Where:  Hostellerie de Plaisance  is located in Saint-Émilion, one of the foremost names of Bordeaux and one of the most beautiful villages within famous Wine names.

Romance points: You’ll fall in love with the great wines of Bordeaux and the hotel’s views of the vineyards and village and more and more with each other on an amble through the vineyards of Saint-Emilion or the surrounding vineyards. Dinner on the terrace helps to set the mood, with fine cuisine inspired by the region and the starry night sky as your witness. Alternatively, dine indoors at an intimate table in the dining room, with its wood beams, wire chandeliers and interlacing red woven carpets. 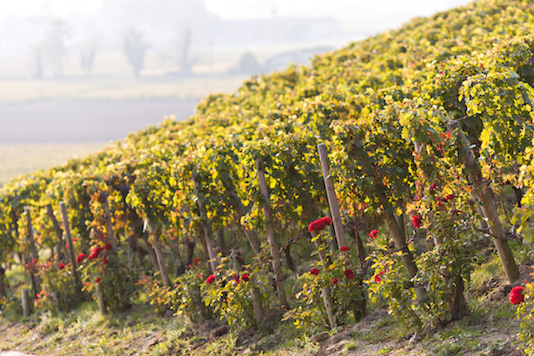 9. The lure of the beach

Where: Soneva Fushi is set right on the beach in the Maldives, with a turquoise lagoon, soft white sand and villas with palm-thatched roofs.

Romantic Potential: This isolated island setting sets the tone for an intimate and private romance, where you are free to enjoy private massages, to admire the fish of the Indian Ocean while diving and to picnic on a desert island, with Champagne. Get cosy on an Astronomical Dinner Cruise at sunset, or spend a night under the stars in a Bedouin tent on your own sandbank. 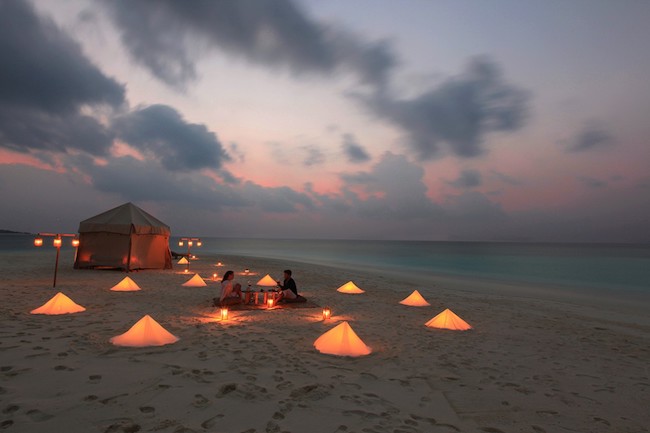 Where: Crillon le Brave rests at the foot of the Dentelles de Montmirail and Mont Ventoux in Vaucluse, Provence, a charming and historic region said to be close to the heart of the likes of Paul Cézanne.

Romance points: This is the land of lavender fields and vineyards that stretch on forever. Take your sweetheart on a cycle along the hotel’s recommended routes, through the vines and olive groves surrounding Crillon Le Brave, and stop for a romantic picnic – your hosts will provide the picnic basket and blanket, and a bottle of rosé (all you need to add is the speach). Dine in the Jérôme Blanchet restaurant, woo one another over Rhône wine tastings, or share a massage in the Spa des Ecuries. 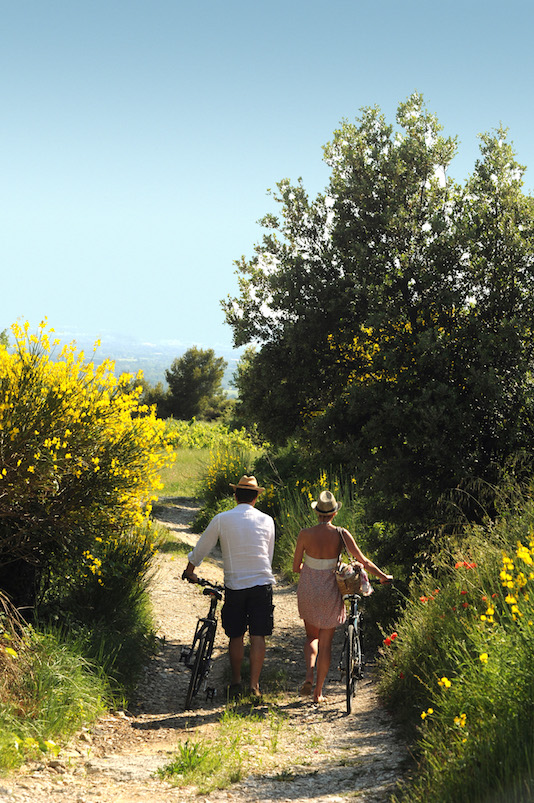